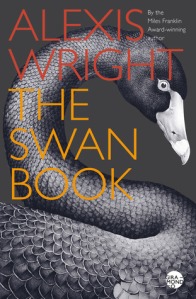 This review first appeared a little over six months ago in Strange Horizons.

Everything in her mind became mucked up. This is the kind of harm the accumulated experience of an exile will do to you . . . (p. 14)

This is a book of exile, of what it means to be kept apart—from land, from community, from stories. It is also a story of what exile does to land and community and stories. And because it is a story of exile, it’s fitting that the story follows the life of an outsider.

Oblivia, so called because her true identity has effectively been lost, is a mute girl-child living in the north of Australia. Her varying statuses of child and victim and Aborigine (the author is herself Aboriginal, a member of the Waanyi nation which lives in the southern highlands of the Gulf of Carpentaria) meld together, reinforcing, implicitly, the sense of disconnection Oblivia faces throughout her life.

Wright underlines this disconnection through her choice of genre. The Swan Book isn’t set in modern day Australia. Rather, it’s a story of future days, science fiction underpinned with magical realism, in which climate change has ravaged the globe and Australia—still fractured in itself, in its customs—is primed for a third wave of colonisation in the form of climate refugees. This speculative setting allows Wright to play with the idea of mirrors and distance, of how the stories of others are blended in—or, more importantly, how they fail to blend in—with those of existing populations. This is a fairly pressing concern in modern Australia, but when the “tyranny of distance” becomes temporal as well as geographical, Wright’s ability to explore social and cultural disconnection is enhanced. This is particularly true when it comes to Oblivia.

The insularity of Oblivia’s life, of her dreamscape, is punctuated by her continuing physical isolation. In the swamp that comes to be called Swan Lake, she is the most isolated—indeed, her life is a series of isolations designed to keep her separate. As a child she is gang-raped by a group of local youths—the older children of her own people, her own community—and she has to live with seeing them walk around afterwards, still a part of that community in a way that she isn’t anymore. The rape is never described, only alluded to, but readers can see the impact from the consequences. Traumatised, Oblivia escapes to the hollow trunk of an old gum tree and falls asleep there—for days or years, the text is never really clear on this point. She’s still a child when found, but her parents have grown old and don’t recognise her so Oblivia stays with the woman who found her. Bella Donna is a refugee from the northern world who has come over the seas to Australia, fleeing from the climate change that has made her own country a frozen wasteland. She tries to raise the child, but it’s uphill work. Oblivia is half-wild and totally mute. She has lost even her name, and “Oblivia” is given to her as substitute.

No sound comes out of her mouth since she had decided not to speak, that it was not worth speaking. She would rather be silent since the last word she had spoken when scared out of her wits, the day when her tongue had screeched to a halt with dust flying everywhere, and was left screaming Ahhhhhh! through the bushland, when she fell down the hollow of the tree. (p. 19)

This choice to be mute is an interesting one—for it is a choice, and one of the very few the text allows her. It’s also a sustained choice. In any other story, this might lead to a triumphant moment of speech, where Oblivia reclaims her original name and denounces those who assaulted her. Not so in The Swan Book. Oblivia’s stubborn disengagement with the outside world, her total refusal of it in favour of the swans and her own inner landscape is arguably the most consistent facet of her character. She does come to speak occasionally, but it’s never a moment of triumph, never an unmasking of herself or of any other.

Both Oblivia and Bella Donna live in the Aboriginal community, but apart. Bella Donna, of course, lacks the common experience of culture. Her lands are gone, her stories are foreign. Oblivia is just a reminder of failure, an existential reproach. It is no wonder they keep (are kept) apart. In the swamp, they live in the old and rusting hull of an abandoned ship, and in this ship Bella Donna tells stories of swans and sailing, of the long journey over waters to the climate refuge that is now her home. Yet this fractured, failing community is in itself an isolated thing—it is less a community than a camp, limited and administered by the Australian army for the supposed benefit of its inhabitants.

Swamp people were not ignorant of white people who, after all, had not turned up yesterday. Having lived it all, they claimed to have at least ten, or possibly more generations of knowledge, packed up tight in their mentality about white people doing good for them.(p. 22)

Oblivia is therefore the most powerless individual in the most powerless community. It’s hardly any wonder that she turns in upon herself; rolls echidna-like into a mental ball, and refuses engagement with anything but swans and story. Yet stories collide—both the foreign stories of swans, and the myths of social development.

As a child, before the rape and the gum tree and the old abandoned hull, the girl who would become Oblivia had been destined for an arranged marriage to the boy who would become Warren Finch. Finch is a rising star in Australian politics, an Aboriginal boy made good, his life and education arranged from childhood as an experiment to produce an indigenous wunderkind, a sort of cross between Moses and Mandela. And it works—by the time Finch comes to Swan Lake, looking for his promised bride, he’s an international figure of folk hero standards, on the brink of becoming Prime Minister.

Oblivia, totally unwilling, is carted off first to his ancestral lands, and then to the lands of government. She’s primped up as if a doll, dressed in a wedding gown with her fiancé’s white attendants doing her hair and nails and transforming her into a perfect vision of a First Lady, and there’s nothing Oblivia can do, isolated from her land, from her people and the stories that sustained her. The story she’s in now is one of supporting parts, of a girl on the sidelines of a boy-makes-good tale, and there’s no place for swans here. Her wedding gift is the literal destruction of Swan Lake; the army camp closed, the swamp filled in.

The fiery woman worked her fingers to the bone to get into the girl’s brain, as though this was where one removed grime, salt, vegetation, blood of dead animals, lice, and whatever thoughts about having different origins she had brought into the house. (p. 221)

Oblivia’s new home is more isolated even than gum trees. She’s kept in a tower on the edge of a city, where the enormous rising tides of climate change periodically cut her off and send waves through the streets. How she and the swans find each other, how they return home, and how Oblivia integrates/discards her life as First Lady make up the remainder of the book, but Oblivia is always, always isolated. Her function, almost, is to exist on the edge of society and be held up (as pariah, as victim, as example in a manipulated southern Camelot) and in this she is largely a metaphor—and a passive one at that.

Outside of her choice to exclude speech and her mutually clinging relationship with swans, it’s hard to mistake Oblivia for anything but a largely passive character. She has so little agency, and it’s only towards the end of the book, as she leaves her tower-life behind and begins to trek north in an attempt to find her home (long gone, bull-dozed and the lake and swans all gone) that she begins to take an active role in the shaping of her own life. Usually this is a characteristic I find off-putting—especially so in female characters, if I’m honest, because of the stereotype of passivity, of victimised and reactionary behaviour so often hung upon women in literature—but in The Swan Book this is something that for once doesn’t bother me. It’s clearly the result of deliberate choice, not thoughtless typecasting—and that choice again underlines the theme of exile, of isolation and the problem of how to live when land and home and culture are no longer steady things to stand upon. Why should Oblivia be active in her resistance, when everything is so rigged against her? Why shouldn’t she fall into passivity, into reactivity and escape?

She forgets to act when memories quickly regain control of her brain, and instead of fighting, she escapes with a flood of thoughts running back along the song-lines to the swamp, and the language inside her goes bolting down the tree with all the swans in the swamp following her. (p. 172)

It’s impossible not to view this book through the lens of race relations. The relationship between white and Aboriginal Australia is long and uncomfortable, an often bloody conflict. Today Aboriginal Australians are grossly over-represented in the many negative metrics—poverty, crime, lack of education—resulting from this history.

This isn’t all resolved by science fiction, for Wright’s imagined future is not a hopeful one. Australia may be suffering (and suffering less) from climate change, the premier politician and saviour figure of the nation may be Aboriginal, but the more things change . . .

The gap between white and Aboriginal Australia, the total lack of understanding, the segregation of population is not all that different from today. Only the set dressing is different. Even Finch is, in many ways, an abject failure. The product of a dream, the desire to produce a perfectly educated, perfectly integrated man, he still can’t escape the gravity of national colonisation. Finch steamrolls over everything he doesn’t like, and it’s hard to sympathise with him—well-meaning though he might be—in his attempt to forcibly acclimatise Oblivia to his life, his lands, his determination of how her life should be organised and experienced. After this I found it very hard to like him, but then I was never sure, reading, if I was meant to do anything other than appreciate him. Finch is designed for appreciation, after all, built for it from the ground up, and he’s in many ways a more difficult character than his betrothed.

Still, ambiguous antagonist though he might be, it’s important to have a character like him. He represents as much as Swan Lake the conflicts within Aboriginal Australia: how to respond to colonisation, how to react to the overwhelming stories of others, how to get your community to react to them . . . there are layers built into these conflicts, and there are no ideal solutions come on the wings of swans to wrap the story up in a neat little bow. Still, open-ended and difficult as the book may be, I hesitate to ever describe it as messy. It’s clearly tightly constructed, the product of long thought and erudition, the ambiguities and frustrations and fallings-off deliberate choices.

The Swan Book is complex, challenging, and the finest book I’ve read for quite some time: deeply original and vivid. It’s something I see myself going back to time and again, and if it’s not at least long-listed for the Man Booker in the coming year there’s no justice in the world.

Spoiler alert: six months after this review was published, I can tell you there is no justice in the world. Boo. Boo! But it fits with the themes and topic of the book, sadly.