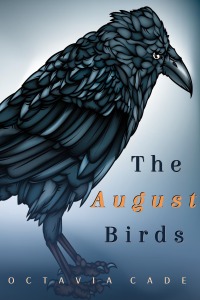 August blinked at the sunlight. “I’m so warm,” he said. “It’s nice. I hardly ever feel warm now. It makes me sleepy.”

“You will not want to sleep through this,” said Muninn. They were sitting on a boulder, with August’s blanket under them to soften the stone and although the rock was on sloping ground the small rise behind gave no shade and the heat beat down upon them.

“We could have waited in the camp,” said August. It was not far away, set up under thorn trees and palms, and if it still looked warm there then at least it would be cooler than the mass of black rocks and pebbles where they rested, or the sandy floor at the bottom of the slope that was getting too hot to walk on if one had feet that had never been toughened to it. “I should have brought my slippers.”

“Stop complaining,” said Muninn. “Do you see him complain?” And she indicated the man below, bent and hunched over the ground, sifting and sorting and brushing, his dark face a study in concentration and his fingers gentle in the earth. Huginn had wedged himself beside the man, right up close to his knees, and August couldn’t understand how he wasn’t knocked aside as the man worked, but the raven bobbed and weaved his way around obstruction.

“What’s he looking for?” said August.

“His name is Kamoya,” said Muninn. “And he is looking for fossils. He has found many before, but he is about to find another. It is the most important fossil he will ever find.”

There was a brief moment of stillness then as Kamoya paused, his body silent, unmoving. And then he was moving, and Huginn too, as Kamoya dug a dark fragment out of the earth and Huginn’s beak was pressed up against his hands, pecking at the dirt between fingers, and then there was a little curved piece of bone, no bigger than August’s palm, and Kamoya held it up to the light and grinned while Huginn cawed in triumph.

“What is it?” said August again, leaning so far over his boulder that Muninn was obliged to take a fold of his pyjamas in her big blunt beak and haul him back from overbalancing.

“It is a piece of bone,” she said, when August was sitting still and safely again. “A very old bone, taken from the skull of a boy who has been dead a very long time.”

“Like and yet unlike,” said Muninn. “About your age, certainly, although the fix is not exact. Not Homo sapiens, though. He is too old for that, and too early. He is another member of your genus, and so related. If you were to look him up, your books today would refer to him as ergaster.”

“Is that his name, Ergaster?” said August.

“That is a classification, not a name,” said Muninn. “Call him Turkana, if you wish. It was the name that was given him from this place, from the Lake that rests nearby.”

“I like Ergaster better,” said August. It reminded him of his own name. They seemed to fit together, belonging as they did to two boys who would die young and in such different places. Ergaster would not have spent his life in bed, or being taken to hospitals for beads and blood tests. He would have found August’s life amazing, a strange story and a frightening one, perhaps, and he could have shown August his own strange life so that August could be amazed and frightened in turn. Two boys. He was sure that they could have found something in common.

“How long ago did he live?” said August.

“One and a half million years since,” said Muninn, placid, and her wings flexed as if remembering long soaring and flights far beyond.

“That’s… a very long time,” said August. He looked at Kamoya, who was still brushing carefully at the skull fragment in his hand, the bone as dark as rocks. “How did he even see it against them?” he said, half to himself and wondering. “And how can he tell what it is, that it’s even a boy at all?”

“He is careful and lucky both,” said Muninn. “And he is good at his job, very good, and he has practiced much, taken great care. It is no easy thing to be a fossil hunter, to pick meaning out of fragments and emptiness.”

“But it’s only a piece of bone,” said August. “Just a little piece.”

“Yet he can tell that it is hominid, and from the head,” said Muninn. “And it is not the only little piece that he will find, and he will soon have help.”

Huginn gave a satisfied croak then, and just a moment before Kamoya rose the raven clambered onto his shoulder and was carried all unnoticed back to camp, his head held at a jaunty angle that mirrored Kamoya’s happy expression. The man looked, August thought, as Caroline had looked when she lifted her face from the telescope: a look of wonder and discovery that connected through centuries and continents.

“Quite the opposite,” said Muninn. “He has gone to call his employer and his friend, and in the coming weeks the crews here will continue his work, for what Kamoya has found is the first fragment of the most complete skeleton of an early human that has yet been found. It is an extraordinary discovery, the find of a lifetime.”

“I wish I could stay and see all of it,” said August, knowing that he could not. He had both a day for himself and little more than a week, and neither would be enough.

“You have seen the beginning of it,” said Muninn. “The spark. It is from such small things that science is made, that the universe is so understood. Little things, one above the other and scattered as the boy is scattered. They will find him, even so, and lay him out: vertebrae and scapulae and skull, tibia and fibula and the ribs that held his heart in place.”

“It’s so strange,” said August. “That he’s here, still. I mean, if you had told him, if you had asked him, that he would be here a million years later… what would he have said? How could he have pictured it?”

“He could not have pictured it,” said Muninn. “It would all have looked different to him. Not just the land, for that has changed about his bones in the time he has been gone. But the life that he had–that too would look different, and ephemeral. Do you know what ephemeral means, August? It means something that does not last.”

That August understood. His life was shorter than most, and everyone he knew would move beyond him, on and on, but they would move beyond for decades, perhaps, and then all of them–everyone who knew him–would be dead. But compared to one and a half million years those decades were short, and the confusion made him feel very small. It was as if the decades he would miss did not actually matter. It was as if they were almost nothing.

“Muninn,” said August, “Do you remember him?”

“If he had pictured it, would you know?”

“No,” said Muninn. “He had quite enough else to think about.”

There was a pause. “I’m not going to be a fossil, am I?” said August, with some trepidation. He didn’t know whether to be anxious or sorry. He found he did not quite like the thought of being poked at and dug up and arranged after death. His body had been displayed and prodded enough beforehand–and yet, and yet. It would make a change to have people excited about him being dead, instead of just plain sad.

“Probably not,” said Muninn, and although her voice was grave there was an undertone to it, a lighter note within the croaking that made it sound as if she were trying not to laugh. “Most people aren’t. Does that make you sorry?”

“That,” said Muninn, “is not the worst answer in the world.”

“I wouldn’t have minded being a fossil hunter, though,” said August, and beside him Muninn closed her eyes to the sun, as if she were dreaming and the dreams were pleasant.

Tune in tomorrow for the next chapter, wherein August is taken back in time to see the first picture taken of the Earth!