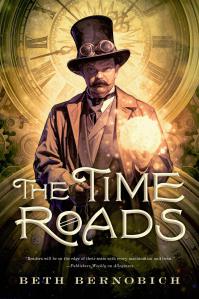 “Time was like sunlight pouring in all directions, susceptible to prisms or mirrors, or even a child’s hand.”

I can’t deny it: I’ve been waiting for this one for a while. I find the idea of time travel a fascinating one. It’s pure speculation, in a genre known for it.

The Time Roads takes an interesting approach, both structurally and in-story. It’s not a novel so much as four intertwined novellas, taking place over a 17 year period and in different time streams. This is something that could be confusing for readers, but I appreciate the fact that Bernobich doesn’t cut down into chunks. She expects the reader to follow along, and given that I don’t enjoy being pandered to and explained at this gets extra marks from me.

The novellas are set in an alternate political history, one where the relationship between Ireland and Britain has been flipped. Ireland is a great power, and is experiencing (ever more) trouble with its dependencies across the water. This is set against a wider backdrop – both continental and global – of shifting governments and loyalties.

The Golden Octopus (beginning in 1897, but spanning several years) starts things off, with the introduction of Áine, the Queen of Ireland and the commander of her guard, Aidrean. While the latter is off investigating a series of murders, the young Áine is fascinated with the scientist-mathematician Breandan, who is researching his way to viable time travel. A Flight of Numbers Fantastique Strange (1902) explores the murder investigation from another perspective. I won’t spoil the ending, but suffice to say by the time it’s all done the timeline has shifted. Ars Memoriae (1904) returns to Aidrean, who’s sent off to the continent to investigate various plots and treacheries, and it’s here the possibility of altered universes becomes a political tool rather than a personal quest. Finally, back in Ireland – The Time Roads (1914) – Áine is dealing with Anglian rebellion, where politics and time travel are making a giant, murderous mess of her country.

Of particular interest is Bernobich’s conception of altered time – particularly the fact that when time changes, memories of the (alternate) life intrude on the individual as he or she goes about their business. This, as one might imagine, is a highly disconcerting occurrence. It’s the kind of thing that could make one doubt their sanity – but it also allows the characters extra knowledge with which to navigate cause and effect. And to compare their lives before and after, as it were.

One of the characters that strikes me here is Ó Cadhla. An advisor of Áine’s, he’s very much the gruff old uncle figure. He also has a dead daughter, Maeve, who is “resurrected” when timelines shift. Well, good. We see his grief, we feel for him, but everything gets fixed – in his world, anyway. I can’t help but wonder about the parents, if there are any, who have the memories of a live child and the reality of a dead one. What would they do to get hold of a time machine and alter their reality? Unsurprising, then, that personal motive – saving of parents rather than child – is a factor. Push down on one end of a see-saw, and the other end come up.

This emphasis on hinted-at possibilities, in the roads-not-taken, can also be seen relationship between Áine and Aidrean. This is in some ways fundamental to the book as a whole. It’s the strand that ties the novellas together – more so than the time travel to my mind. And yet it reflects that travel thematically: it is a relationship of potential. Implicit in it is the idea of possibility, of different paths and lost potential as their mutual attraction simmers away but never quite comes to fruition. I don’t say this as a criticism. It isn’t. The Golden Octopus seemed to hint at the possibility of a love triangle with Áine and Aidrean at two of the corners, but I’m delighted to say no such thing occurred. I suspected it would. I had girded myself to read through it anyway – but the thing about relationships is that potential frequently goes unfulfilled. It’s a subversion of expectation, but one where the reader is left wondering – very much despite herself – what if? In a book where timelines shift on what if, this is a good and subtle touch.

In one way, I would define The Time Roads as a study in dualities. There are more than two time streams, more than two people playing off each other, so this isn’t an accurate description really. Yet the narrative focus is on duality: duality set against a background of endless possibility, against calculations of probability. This is in some ways a consequence of form. Within the strictures of a novella one really has to focus on the meat of the story and not get side-tracked into dead ends that, no matter how interesting, detract in a limited word count.

This duality is most noticeable in A Flight of Numbers, concerning the character of Síomón. He is contrasted with his sister Gwen, with Aidrean, and finally with his own self. It’s the most effective of the four novellas, to my mind, as it’s simultaneously the most focused and the most emotive of the bunch. It’s not perfect, however – I would have liked a significant woman character who wasn’t a murder victim or consigned, with justification, to the madhouse.

One problem with fantasy set in historical periods is “Everything changes but the status of women”. You know: there’s magic and all sorts of strange new things, but there’s also women, staying in the same traditional roles because realism. Luckily, Bernobich doesn’t do this. In her alternate history, women are educated in tertiary institutions. They instruct there, they are, in Valerija’s case at least, in government (although not in the Irish government, it seems, apart from the Queen. All her advisors are male). A woman is even the religious head of Ireland, even if she’s only in a walk-on part.

True, A Flight of Numbers isn’t particularly well represented: Maeve and Susanna and Gwen are all mathematicians of one variety or another, which is promising: there seems to be an equality of education at least, even if it hasn’t percolated up and into government. Yet in one timeline, they’re barely mentioned. In the other, they’re either murdered or sent completely mad under the weight of numbers and brother and locked away in an asylum. Yet the other three novellas have significant female characters to balance this out, however, so the “Has Decent Women Characters” box gets a big tick from me. (I hope, in particular, that if Bernobich writes more in this universe I get to see more of Gwen. I find her especially fascinating.)

All in all, an interesting read. If I had to rate it, I’d say four stars out of five. I have to say I responded to it more intellectually than emotionally, but then that’s maths for you. The only maths I ever thought was beautiful was group theory, and there’s nothing of that in here. There is, however, an unusual look at time travel in a well-realised world, with plenty of subtle touches.

Disclaimer: I got a free copy of this book in exchange for an honest review.