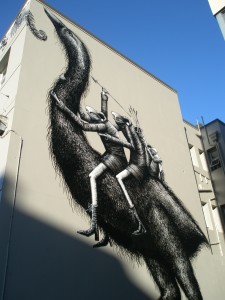 I spent many years at university down in Dunedin, so technically I’ve walked every bit of these walks already. But there I was, flipping through the utterly delightful 1001 Walks You Must Experience Before You Die, and there they were: the Dunedin Heritage Walks.

They’re not very long, less than an hour each. Both of them start and end in the Octagon, which is Dunedin’s version of the town square, a place where I’ve spent many happy hours, mostly drinking. And each walk wanders round the oldest buildings of the city, built way back when Dunedin was the richest city in the country, courtesy of the nineteenth century Otago gold rush.

So last weekend I happened to be back down in Dunedin, attending a conference there (I gave a paper on the presentation of science in a couple of second season episodes of The West Wing). And on Saturday morning, after the conference, I had a few hours to kill before flying home and there was a southern miracle: sunshine on a winter’s day! It was even warm. So I picked up the relevant pamphlet from the information centre and went and did the Heritage Walks officially instead of technically. It was basically a hunt for those little historic plaques on the sides of buildings I was already familiar with, but the walks were very pleasant nonetheless. And I was pleased to see that Dunedin’s being covered in murals – like the one of a moa, by an artist called Phlegm. Another detail I’ve never seen before is one of the stained glass windows in the cathedral, which refers to the local environment, being filled with seals and yellow-eyed penguins and other organisms rarely seen inside a church.

Current Count: 996 Walks To Experience Before I Die.