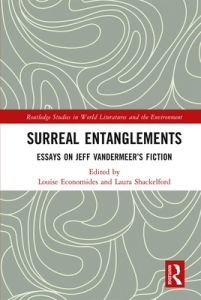 I have a new paper out! It’s in Surreal Entanglements: Essays on Jeff VanderMeer’s Fiction, edited by Louise Economides and Laura Shackelford, published by Routledge. The paper’s called “Microbiology and Microcosms: Ecosystem and the Body in Shriek: An Afterword.” Which is a fancy way of saying that I’m talking about the human microbiome, the plethora of different species that live in and on the human body. Most of my academic work seems to sit in the intersection between science and speculative fiction, and this is another example of that.

Shriek: An Afterword is one of the Ambergris books; a series in which VanderMeer explores the city of Ambergris, which is the home of both humans and a fungal species called the gray caps. Fungus contaminates in Ambergris, and Duncan Shriek, one of the primary characters of the book, is slowly turning to fungus himself. Which made me think of the human microbiome, and how we are already host to fungal organisms – you and I and everyone have fungi living inside us as a matter of course, and so Shriek’s transformation is a sort of speculative extension of existing biology. It causes him – and everyone around him – to reassess his identity, and that reassessment is something that the human microbiome is prompting as well. We so often think of a human as being a singular organism, when we really are not. In reality, that apparently singular organism is more of a colony than anything else! How this impacts on the way that we think about ourselves is something I find just fascinating, and it’s that which prompted the essay.