I have a new story out! Actually, it’s a novelette, which is nice. It’s got a fairly long title to go with it’s lengthy self as well: the full title is “The Women Who Didn’t Win Nobels, And How World Trees Are Not A Substitute.” It’s in the latest issue of Fusion Fragment, and I love them for taking this gargantuan mash-up of a story, I really do. The story is science history and climate fiction and mythology and compromise layered over and over each other, so you see “fusion” is really the best word for it.

“The Women Who Didn’t Win Nobels” focuses on three women who, indeed, did not win Nobel prizes for their work in science: Lise Meitner, Rosalind Franklin, and Chien-Shiung Wu. All of them arguably should have won in their respective fields, but the main storyline here is them spending their afterlives at the World Tree, being interviewed by another woman, another scientist, who is considerably less talented than they are and who has a decision to make. She is looking for advice, essentially, or perhaps she is looking for confirmation. Science comes with compromise, and the decision on where to make that compromise, and the decision on if it should be made at all, is a fundamental one… especially in a world which in which climate change may increase the potential for conflicts. And these three women who, in alternate realities would have received more credit for their work, were all touched in some ways by war and/or conflict, and they have ideas about how such should be navigated.

It’s a story that I’m particularly attached to, so I’m glad it’s finally out there in the world! 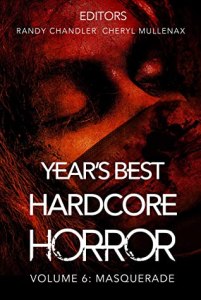 I have a new (old) story out! “Otto Hahn Speaks to the Dead” has been reprinted in the Year’s Best Hardcore Horror, volume 6, from Red Room Press. The story was originally published in The Dark.

This is the second time I’ve had a story in YBHH, and I’m grateful to the editors Randy Chandler and Cheryl Mullenax; I remember them making it plain that people shouldn’t overthink whether their story is “hardcore” or not before submitting. It’s what encourages me to send stuff into them, because honestly? “Otto Hahn” is a very dark and deeply grim little story, but if I had to think of a single word to describe it, I’m not sure that “hardcore” would make the top of the list. It probably wouldn’t even make the top ten. If I had to pick a single word, it would probably be “tragic.” The story deals with an episode in the history of chemical warfare. There’s a lot of terrible things in that history, but this, about the suicide of chemist Clara Immerwahr, may be one of the saddest.

“Otto Hahn” is a story about grief and regret, and in some ways it is a story about the utter uselessness of doing better, because when you have chosen to involve yourself in something so monstrous, well. Is atonement even possible?

I don’t know, but I suspect not.

My new book is out! The Impossible Resurrection of Grief is published by Stelliform Press, and it’s more climate fiction from me. This time, though, I’m focusing on the idea of ecological grief.

With the collapse of ecosystems and the extinction of species comes the Grief: an unstoppable melancholia that ends in suicide. When Ruby’s friend, mourning the loss of the Great Barrier Reef, succumbs to the Grief, the letters she leaves behind reveal the hidden world of the resurrected dead. The Tasmanian tiger, brought back from extinction in an isolated facility, is only the first… but rebirth is not always biological, and it comes with a price. As a scientist, Ruby resists the Grief by focusing her research on resilient jellyfish, but she can’t avoid choosing which side she’s on. How can she fight against the dead and the forces behind them when doing so risks her home, her life, and the entire biosphere?

You should be able to buy or order the book most places (please consider ordering through your local bookstore!), and you can find all your buying options either on my book page here or at Stelliform.

I have a new book coming out! The Impossible Resurrection of Grief is a novella from Stelliform Press, and it’s due out on May 20th. You can pre-order it at the link there.

Before I tell you anything else about it, just look at that cover. Isn’t it gorgeous? The cover artist is Rachel Lobbenberg, and she’s done an amazing job. If you look closely, you can even see the grumpy eyebrows on those little flying rock wrens!

Stelliform’s focus is climate fiction, which is something I’m enormously interested in. When I saw their call for novellas last year, I was determined that I would have to write something for them – I ended up writing this book during my time as artist in residence at Massey University/Square Edge, and I’m truly grateful for their support. My time as artist there was affected pretty strongly by pandemic, and I spent a lot of it in lockdown. One thing I noticed was the odd news article about how many people in lockdown were logged into nature cameras, such as those down at the albatross colony just outside Dunedin. People were feeling nature-deprived, and it struck me that as climate change accelerates and biodiversity plummets, the phenomenon of ecological grief (which is beginning to get some attention in academic circles) might become a more significant part of daily life.

In the climate-affected future of Grief, this is exactly what has happened. The Great Barrier Reef has died, and the repercussions of this, and of all the other ecological absences, are felt through a phenomenon known simply as Grief. But in out of the way places, some scientists are working to bring back to life some of the creatures that have been lost… 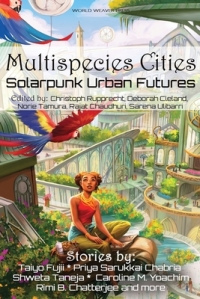 I have a new story out! And unlike my last two, this one’s not horror. It’s actually optimistic for once, but that’s what tends to happen when you write solarpunk. It’s an area I’m interested in doing more work in, as I like the focus on community, diversity, and sustainability that’s generally a hallmark of the genre.

This particular story, “The Streams are Paved with Fish Traps,” can be found in the anthology Multispecies Cities: Solarpunk Urban Futures, from World Weaver Press. The anthology was produced with the support of the Research Institute for Humanity and Nature in Kyoto, Japan, so as you can see there is a strong focus on an interdisciplinary approach here, and that’s something I appreciate.

My own story talks about urban ecology, which is a field that, like solarpunk, I’m becoming increasingly interested in. Back in 2019, I saw a news story out of Wellington, New Zealand, about a discovery some ecologists had made in the storm water systems beneath the city. The pipes were being colonised by fish, including eels, and I thought that was just marvelous. I knew straight away that I wanted to write a story about it, and so when World Weaver Press contacted me, wanting to know if I’d write a story for their upcoming anthology, it was an easy choice. I’m so glad to be a part of this project! Hopefully there’ll be many more like it in the future.