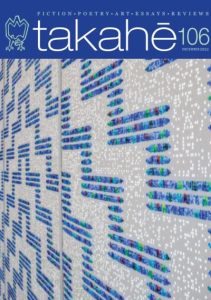 I have a new story out! “Pink” is more than a bit creative nonfiction as well as short story, and it can be found in issue 106 of takahē magazine.

A couple of years back I was down in Christchurch, visiting a wildlife reserve (mostly to see the takahē there, to be honest, so this story clearly went to the right place) and a display about birds informed me that we used to have flamingos in New Zealand. Not any time recently, but millions of years ago when there used to be a lake at St Bathans in Central Otago. They dig up all sorts of fossils there now, and one of them was an ancient relative to the flamingo.

New Zealand is very much bird country, so I couldn’t help but wonder… what would it be like if the flamingo had survived? What change, if any, would it have made to our culture and conservation? “Pink” is that very hypothetical. It’s a fun little piece, and it’s going to be part of the series of essays on NZ ecology I’m due to put together later this year, when I’m down at Canterbury University as their writer in residence. Can’t wait!

I have a new book out! Or, more honestly, I am one of a number of people who have contributed to a new book being out. Reckoning, which published creative work on environmental justice, was kind enough to let me sign on as fiction editor for their issue 7, along with Priya Chand (nonfiction editor) and Tim Fab-Eme (poetry editor). Together the three of us, with the help of a number of excellent editorial readers, put together this year’s issue of Reckoning, which we themed around oceans and the global water system.

Each of the several dozen pieces that we picked will be available to read for free online throughout the year. You can see the menu and the publication schedule here. If you’d like to purchase the entire wonderful issue, however, the ebook is available now, and the print release is scheduled for July; details are at the link. There’s over 250 pages of excellent writing there! And that cover, Drua, by Elsie Andrewes, is gorgeous.

Speaking of the fiction writers included in this issue… their work is incredible. From the Great Pacific Garbage Patch to the local swimming hole, from dolphins and sharks and burials at sea, these are hopeful stories of people working to make our watery world a more just and sustainable place. Please take a look.

I have a new story out! It actually came out a couple of months back, but I’m still playing catch-up here. “Chickenfoot” is available to read in the anthology Into the Forest: Tales of the Baba Yaga, edited by Lindy Ryan from Black Spot Books.

When I saw the call for stories for this I knew I had to send something in. Not, I have to admit, because I’ve got any great love for Baba Yaga. But her house… that’s different. I’ve always found the house fascinating! The way it stalks about on its chicken legs. Any why a chicken? Let’s face it, hens have many marvelous qualities, but if I’m going to stick bird legs on a house a chicken is not the animal that immediately comes to mind. (What does come to mind? I’m not even sure. I suppose it depends what kind of environment the house is traveling through. If it’s swampy you’d want a water bird, and so on.)

That’s what inspired the story. The chicken in “Chickenfoot” is dead, and Baba Yaga’s looking for a replacement. She keeps a diary of her experiments, and they do not go well.

“Chickenfoot” isn’t a very long story; it’s not that much bigger than a flash, I think. I’m tempted to keep going with it, however… add more birds, and more creepiness, and bring out the backstory of the chicken. A project for the future, maybe.

I have a new story out! “Older” is free to read in issue 17 of The Deadlands. It’s my first time appearing in that market, but hopefully not the last.

It’s only a very short story, barely more than a flash, but it was still interesting to write (and, I hope, to read). As can probably be guessed from the title, The Deadlands is particularly interested in stories about death, which gives a lot of narrative possibilities. “Older” interprets this theme through ghosts and extinction, as the narrator is confronted with her own Neanderthal ancestry. How do you engage with the dead, when they exist, still, in your own body? Admittedly, we see this every day, as people lose their parents or grandparents, and look into the mirror and see the pieces of themselves that they shared with them.

I suppose it’s not really that different: having your mother’s eyes, having your great-how-ever-many-mother’s DNA. Because the Neanderthals are not entirely gone… they interbred with early modern humans and that genetic inheritance can still be found in many of us.

It seemed like a fascinating idea for a story!

I have a new story out! It came out last month, actually, but I’m still playing catch-up with the blog, so better late than never. “Border Run” is free to read in the September issue of Clarkesworld.

It’s one of a very loosely linked set of stories of mine about life in a world after the ocean ecosystem has almost entirely collapsed. Consequently New Zealand, down at the bottom of the world, has reinvented itself as a place where conservation, particularly marine conservation, is the primary national ethos, and the stories go from there. It’s technically post-apocalypse, I suppose, in that the world these stories take place in is solidly set after global environmental disaster has taken place on an apocalyptic scale, but I wanted it to be an optimistic, cooperative response to apocalypse more than anything else.

That’s less evident in this story, admittedly, as it deals with overfishing. Even now, foreign fishing vessels occasionally turn up in our waters when they shouldn’t, but in a hypothetical world that’s starving due to ecological collapse, such incursions may well be more common. This isn’t a happy story, particularly, but I’m going for thoughtful and nuanced (alongside the killer mermaids) so hopefully that’s worked out to some extent.