Oh, playing catch-up on the posts I should have made…

Anyway, I have a story out! It’s not a new one, but it’s been reprinted in an awesome charity anthology, Black Dogs, Black Tales, which is benefiting the Mental Health Foundation of New Zealand. It’s subtitled Where the Dogs Don’t Die, so don’t worry about turning the page and finding poor Cujo. Some of the tales in here are pretty grim, but the dogs survive so that’s the main thing.

My story, which the editors Tabatha Wood and Cassie Hart kindly included, is “The Feather Wall,” which was first published last year in Reckoning. The dog in this story – cleverly called Dog – is one of those service animals trained by the Department of Conservation to protect our native birds. In this case, the kākāpō: a flightless parrot native to NZ which is teetering on the brink of extinction. It’s basically kept alive on offshore islands which have been stripped of introduced predators like rats and stoats. Anyway, “The Feather Wall” is a post-apocalyptic story wherein a man and his dog keep up their conservation work, because kākāpō are worth protecting even if the world has gone to shit. They really are! Anyway, if you’d like to read the anthology and support a good cause, the link’s above. 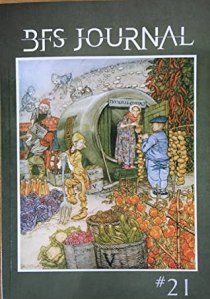 I have a new paper out! “Confronting the Minotaur: Gender, Reconciliation, and the Labyrinth in Fantasy Literature” has been published by BFS Journal.

I love labyrinths, I really do. They pop up a lot in fantasy lit, and I’m always glad to see them. They always seem more exciting in fantasy than in real life, but such is the case for a number of settings, I’m sure. Anyway, over the years I’ve noted a number of variations related to gender: who solves the labyrinth, who’s settled in the middle of it, that sort of thing. One of the archetypal stories is of course that of Theseus, who – with the help of Ariadne – solves the labyrinth to confront the monstrous devouring Minotaur at the centre of it. If we take this as a basic pattern (albeit one that rests primarily on the European tradition of labyrinths, as opposed to those traditions from other parts of the world) we can see how such patterns are repeated in, for example, Ursula K. Le Guin’s The Tombs of Atuan and J.R.R. Tolkien’s The Hobbit and The Lord of the Rings. Whether the maze is made out of underground tunnels or the dead marshes, the risk of being eaten or otherwise swallowed up is significant. Does this pattern change, however, when the solver of the labyrinth is female? Meredith Ann Pierce’s The Darkangel is an interesting contrast here, where the monstrous devourer exists outside the labyrinth, and the centre is a place of science and safety.

I tinkered with this paper on and off for well over a decade, so I’m glad it’s finally been published. Let me know what you think!

My new book is out today!

With governments denying climate science, scientists from affected countries and organisations are forced to traffic data to ensure the preservation of research that could in turn preserve the world. From Antarctica, to the Chihuahuan Desert, to the International Space Station, a fragile network forms. A web of knowledge. Secret. But not secret enough.

When the cold war of data preservation turns bloody – and then explosive – an underground network of scientists, all working in isolation, must decide how much they are willing to risk for the truth. For themselves, their colleagues, and their future.

Murder on Antarctic ice. A university lecturer’s car, found abandoned on a desert road. And the first crewed mission to colonise Mars, isolated and vulnerable in the depths of space.

How far would you go to save the world?

I’ve a new story out! “Otto Hahn Speaks to the Dead” is free to read at The Dark. It’s lovely to have another story with them – they’re a market I really enjoy.

“Otto Hahn” is one of my science history stories. I’ve a particular interest in writing these, and I’ve always found the science that took place during the World Wars particularly fascinating… mostly because of the ethical issues that result from both gas and atomic warfare. Otto Hahn had the opportunity to work on both. In WW1, he worked with Fritz Haber to weaponise chlorine gas, which honestly is something I find very hard to forgive. It’s tempting to think that he learned from the consequences of his actions, however, because when WW2 rolled round and he had the chance to work on researching the atom bomb (for the Germans, as opposed to the Manhattan Project) he ultimately refused to do so.

Interestingly, as a German scientist he helped his colleague, Lise Meitner, escape the Nazis – as a Jewish scientist, she was certainly in danger from them. Meitner, who with Hahn discovered the process of nuclear fission, was offered a place on the Manhattan Project as well. She refused, on moral grounds. I’ve been thinking of doing another story about her to bookend this one, mimicking its structure and theme.

Anyway, take a look at it and see what you think.

I’m currently the Square Edge/Massey University artist in residence! It’s a three month position, with a visual artist coming in after me. I’ve just completed my first week, and things are very exciting but also a little surreal. The residency is based in Palmerston North, a place I’ve only ever passed through before, and while it appears to be a lovely city the truth is I’m seeing very little of it right now as New Zealand is in lockdown due to COVID-19, so no sightseeing for me.

On the bright side, this gives me lots of time to work on my residency project. I applied to come here a year or two back, with a project called The Stone Wētā, but that particular book was completed some time ago (I was offered the 2020 residency instead of the 2019 one) so I had to come up with something new. That new project, and what I’ll be working on for the next three months, is a mix of fiction and non-fiction, exploring the ways in which science, nature, extinction, and experimentation come together in unusual ways.

I’m looking forward to it!