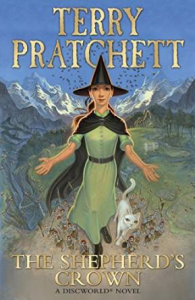 So, the last Discworld book is soon to be on the shelves. It’s a Tiffany Aching book too, which pleases me – I adore the witch books, and Tiffany’s a worthy addition. She is also, I suspect, a worthy successor.

I say that deliberately. I’m not involved with the publishers, I don’t know anything. But I suspect, I very strongly suspect, that in this last Discworld book Granny Weatherwax is going to die.

And alright, so I might be wrong. That happens on a fairly frequent basis so at this point, being wrong again isn’t going to make much difference.

I’d be glad to be wrong, even.

Granny’s my favourite character. The prospect breaks my heart – but I’ve suspected it for a while. Pratchett, as everyone knows, was dying himself – tragically ill. As much as I wanted him to live forever, pumping out books that were often lightyears ahead of anything else, he died. But, you know, he had a good life. And he knew he was going to die.

I think he also knew how much that would affect his fans.

I think he chose a proxy. Someone to take his readers by the hand and say “This happens to everyone. Even me. And it’s alright, because life goes on.”

I mean, can you imagine the conversation between Granny and Death? Sharp and funny and comforting all at once. And you know he’d be as nice as he could, not because of her, but because of little furry Meep. And all along, us knowing that it’s not Granny that’s actually talking to him, not really.

We just get to eavesdrop for a little while, that’s all.

There’s more to this than my mad suspicions and grasping at strings. And alright, so that “more” is a few very tiny extra strings, but I’ll take it.

I mean, look at that cover. Look at it. Tiffany is a downs girl – her heart belongs to the Chalk, to those gentle grassy hills. That is not the Chalk behind her. That jagged mountain landscape looks to me like the Ramtops. Tiffany’s going to the Ramtops, I reckon. Who lives there? That’s right, Granny.

And then there’s the title: The Shepherd’s Crown. If that’s not a reference to a witch’s hat I don’t know what is. Tiffany, who comes from shepherd stock, becoming a shepherd of more than lambs.

Why can’t she do that anyway? I hear you ask. Well, she can. Of course she can – most witches do. But to me, Tiffany has been, for some books now, set up as the leader of the next generation of witches. Just as Granny Weatherwax is known as the leader the witches don’t have, her young protégée has the same potential. I think Granny knows it. I think she’s been preparing Tiffany in her own way, smelling out the potential, tying up loose strings.

Making sure the new shepherd’s ready.

“Yes, you are,” said Tiffany, folding the note and putting it carefully into her pocket. “But it’s alright.”

The cottage was painfully clean, and ready for whatever new witch was prepared to take it on. Tiffany suspected it would be empty for a long time.

“But not forever,” she said. The hat was warm and heavy on her head as she stood in the door for the last time. “I’ll miss you, Granny,” she said. “Goodbye.”

And it is alright. Because Pratchett is dead, and he’ll not come again – but other writers will. And they’ll be as trenchant and witty and compassionate and human. They’ll be Tiffany.

Because there’s always a Tiffany.

And I reckon we’re about to be reminded.