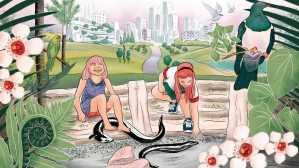 I have a new story out! “Resilience” has been published by Stuff, and is free to read at the link there. It’s the second in a series of cli-fi shorts commissioned by Stuff, so it was a lovely surprise to get that email from them. They said they were looking for a more positive story about the future, and how it might play out in a changing climate. They also said it had to be family friendly, which I admit gave me brief pause. (There’s often more than a touch of horror in my stories, and so when I heard “family friendly” my first reaction – thankfully internal – was “No killing characters off this time, then.”)

So I came up with this story about two kids, Coral and Elsbeth. I reckon they’re about ten years old. Anyway, they meet each other one summer day and run off to play hooky, messing about on the beach and discovering the nesting sites of some very special birds. The emphasis on conservation is going on in the background, really, with the urban landscape they live in having undergone an enormous ecological makeover. Increased biodiversity increases resilience, remember, and with climate change likely to inflict significant disturbance on our ecological systems, supporting biodiversity in our environments is one way of building healthier and more sustainable ecosystems.

And there’s some art to go with it too. Isn’t it pretty?