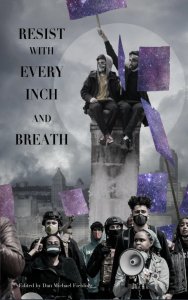 I have another reprint out! My short story “The Stone Wētā,” which originally appeared in Clarkesworld Magazine, has appeared in an anthology from Lonely Cryptid Media. That anthology is Resist with Every Inch and Every Breath, and it’s edited by Dan Michael Fielding. There’s twelve different stories and poems in the book, or so I understand, and given the theme it’s sure to be an interesting read.

The call for submissions went out a year or two back, when we were all in the beginning stages of pandemic, and one of the potential ways to explore the theme was the impact of politics on science. I’m sure we can all remember (or are even still being exposed to) the anti-science lunacy of certain people, many of whom were in positions of power that their intelligence frankly did not merit. I’ve been interested in the intersection between science and politics for a while now, and so, although it wasn’t about the pandemic itself, I was reminded of this story, which had come out a couple of years earlier.

“The Stone Wētā” was influenced by news stories about scientists preserving climate data across borders, in the face of hostility from anti-science governments. The fear was that the data would be destroyed, or access to it limited, and I’m sorry to say that fears of this type of censorship were not wholly unfounded. Anyway, I sent in the story, and Dan was kind enough to take it, and now you can read it (and eleven others!) in Resist with Every Inch and Every Breath.