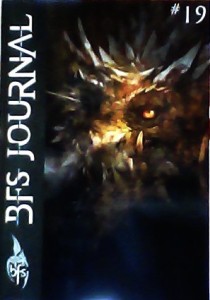 I’ve a new paper out! And it’s on a book series that is close to my heart: The Dark Is Rising series by Susan Cooper, which was the fantasy staple of my childhood. I don’t know how many times I read The Grey King as a kid, but it was a lot. I think as an adult it’s been replaced by The Dark Is Rising volume as my favourite of the series, but it’s a close thing. I still read through all five books at least once a year, generally around Christmas, and I always get something new out of them.

You can imagine, then, just how thrilled I am to have a paper out on it. Cooper’s got some really interesting examples of sacrifice that pop up over and over again in the series, all of them quite distinct from the others, and that’s what I look at in my paper. “Sacrifice in Susan Cooper’s The Dark Is Rising Sequence” is out in issue #19 of BFS Journal. It focuses on what exactly makes a sacrifice: how knowledge and intent work together (or don’t) to form different types of sacrifice, and how the sacrifices made differ between mortal and immortal figures.

We’re used to seeing grand sacrifices in fantasy literature, but so much of the story Cooper tells hinges on the small quiet choices of characters like Jane Drew and John Rowlands, and for me these are often more compelling. These two characters are particularly small and mortal compared to the more supernatural, the more mythological, figures in the text, and it stands to reason that their actions are comparatively small and human, but they’re no less effective – and no less crucial – for all that.