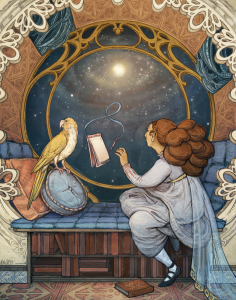 I’ve a new story out! “The Temporary Suicides of Goldfish” can be read for free in the new issue of Kaleidotrope.

It’s the follow-up to another Kaleidotrope story of mine, “The Ouroboros Bakery”, although it doesn’t use the same characters. I’m writing an interlocking series of stories, set on the same magical street, because I enjoyed writing “Bakery” so much that I wanted to go back to the same world and play some more in it. I’d had this idea floating around in the back of my head for a while, about a girl reincarnated as a goldfish (don’t ask me where it came from) and the sheer outrageous ridiculousness of it seemed like it would be a good fit for a street that specialised in dodgy transformations.

I’ve sold four of these street stories so far, and another one’s out on sub. I’m hoping to have a collection’s worth by the end of the year, but for now the weird goldfish story will have to entice you. And here’s a teaser for it:

Everyone deserves a last meal. Mine was fish, Syllabub laughing her arse off as she served it up. Not goldfish, because that would have been bad luck—the kind of bad luck that comes from gossip about a last meal getting back to her Ladyship and being taken as insult. Instead a poor skinny muddy thing in a thin soup, flounder I think, or catfish.

“They’re not at all the same,” says Syllabub, critical, but they’re fish, aren’t they?

“I didn’t think there was going to be a test,” I said, and if I’d any room left in me for panic I would have panicked then, because the Lady and her tanks are the only thing between me and a bloody end instead of a scaly one. And if I’m to be examined on fish before I’m allowed to become one, then I might as well offer myself up for gutting now and be done with it…