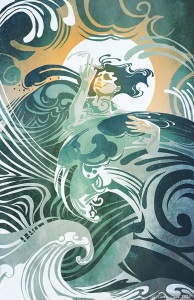 I have a new story out! My last story of the year. It’s called “Come Water, Be One of Us,” and it’s free to read at Strange Horizons, just click on the link.

This is a story inspired by true events. As the wee paragraph at the beginning says, back in 2017, the New Zealand Parliament recognised the Whanganui River as a legal person. You might think that sounds strange, but I’ve long been irritated by the legal fiction that corporations are people when they clearly fucking aren’t. Making rivers legal people as well redresses the balance – and takes into account indigenous beliefs about the personhood of the river in question. And this isn’t just a Kiwi thing. Not long after the NZ Parliament did its bit, the Ganges and Yamuna Rivers in India, and the Rio Atrato in Colombia were also made legal people by the respective governments of those countries. (And it’s not just rivers. At least one mountain here in NZ has been accorded the same status.)

I like the idea of making ecosystems legal people. It gives another layer of protection, and if you know anything about the state of rivers in NZ, you know they need all the protection they can get. But it’s also, in its way, a potential pushback against the ridiculous idea that corporations have the same legal protections as you and me. Those fucking things are not alive. I don’t care how much you love Amazon. It is not an ecosystem like the South American river, and Apple didn’t grow on any bloody tree. They are not alive.

It really annoys me. So I used the idea of rivers, fighting back against the corporations, because what is a person, really? I’m so glad that Strange Horizons bought this story. I had a feeling it was right up their alley – occasionally, when you write a story, you just know it’s a good fit for a particular market. And they got Galen Dara to illustrate it. Galen Dara!!! Author achievement unlocked right there, I tell you. Just look at it. Isn’t it beautiful?