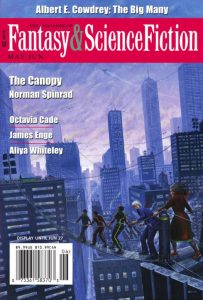 I have a new story out! “Breathless in the Green” is available to read in the latest issue of Fantasy & Science Fiction. It’s the second story I’ve sold to them, and very pleased I was to do it.

“Breathless in the Green” came about because I was looking to write a story about a water monster, possibly using folk tales to do so. And I came across the figure of Ginny Greenteeth, a sort of water hag that hangs round the ponds and stagnant waters of England, pulling kids into the water and drowning them. Now, I’d heard about Ginny before, in the very vaguest sort of way, but what I didn’t realise – and what caught my attention, and made me want to write a story about her – is that “Ginny Greenteeth” is also used to describe duckweed, which is that small, scummy-looking green plant that covers over ponds. You can see where the connection came from. Duckweed could hide how dangerous a body of water is, and a curious child might not take enough care and drown. Over time, such a thing is attributed to the water hag, which is interesting in itself, but duckweed has one particularly stellar property. It’s great for bioremediation, which means it can filter pollutants out of the environment around it.

There’s a water hag who just might be able to remedy that inaction. 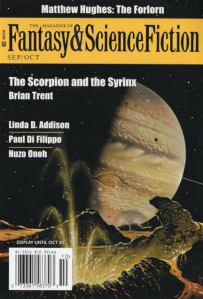 After seven years of submissions, I’m delighted to say that I finally, finally, have a story in Fantasy & Science Fiction. It has taken a long time, and some of the stories I sent there were very good and were published in other markets, but F&SF is one of those bucket list magazines for speculative writers, and they get a heap of excellent stories every single day, so it’s no surprise that it takes persistence to succeed there. Well, persistence I have.

The story that finally got me there was a flash piece about fairy tales and cake. “Seedling” was inspired by the Hansel and Gretel story, which has the dubious distinction of being one of the fairy tales that has typically interested me the least, as well as being the fairy tale that most inspired every childhood birthday cake. My parents had the old birthday cake book from Women’s Weekly that every New Zealand family had at one point, I’m sure, and there are a lot of delightful cakes in there but, as a kid, nearly every year I picked the gingerbread cottage because it had a roof covered in Pebbles and the whole thing was just marvelous. That’s about the only thing I care about in the Hansel and Gretel story: that cottage made of cake, like a sugary angler fish in the middle of the forest.

Except in this story, it’s not the cottage that’s made of cake. Because if you’re trying to camouflage predation in a forest, surely a better option is baumkuchen…

I never had baumkuchen for a birthday cake. It’s on my baking bucket list, though.