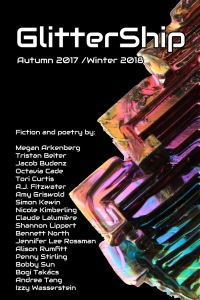 I’ve a new story out! “The Huntsman’s Sequence” is free to read (and to listen to) in the new issue of GlitterShip.

I tend to write a lot about the history of science, but never have I written about it in such a nerdy way. “The Huntsman’s Sequence” is a story about Alan Turing, who worked at Bletchley Park during WW2 and who broke the Enigma code there. His contribution to the war effort was enormous, and he was not rewarded for it. Persecuted for being gay, Turing took a leaf from his favourite movie – Snow White – and killed himself with a poison apple.

This story is a mash-up between the fairy tale and the facts. Turing, of course, is cast as the Huntsman, tracking down Enigma (Snow White). And – I warned you I was a nerd – the story’s structured in the form of a Turing machine programme.

The war is blank.

Not in its individual parts, but as a whole. It covers everything, smothers everything. It blows continents open with opportunity. Much of that opportunity is for death, for carcasses hung up and split open in massive consumption, a grind of bone and blood, but for some the opportunity is a tool for all that. Something to insert into the space between ribs, to lever open and dissect.

Not everyone dies in war. Not everyone sinks into blank nothingness, into unmarked graves and mass burials, into fields turned red and mud that stinks of iron. Some fight with symbols instead of flesh, their weapons heady and hidden, and it is in combination and in permutation that Turing finds his battleground.

He’s under no illusion that it keeps his hands clean. The information he extracts from the body of Enigma, the sweet little Snow White of his waking dreams, is used for murder as much as if he did the stabbing himself….